Despite improvements, many states falling short on pediatric dental care 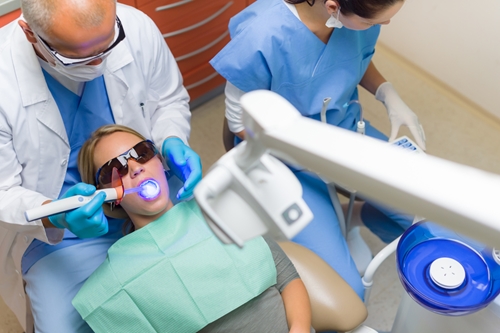 More than 16 million U.S. youngsters don’t have access to regular dental care, although many states have improved dentistry services in recent years, according to a report from the Pew Charitable Trust’s Center on the States.

The Pew study found that 27 states were graded as A or B, while 23 states and the District of Columbia earned only a C or lower grade for their dental services in 2011. However, 22 states improved their grades compared to the previous year’s report and six states – Arkansas, Delaware, Massachusetts, Minnesota, Utah and West Virginia – increased their ratings by at least two grades.

Maryland was one of only seven states to receive an A rating from Pew in the report entitled, “The State of Children’s Dental Health: Making Coverage Matter,” which detailed public policies that cover both insured and soon-to-be insured children.

States that raised the quality of their services did so mainly by reimbursing dentists for preventative care, expanding water fluoridation in local communities and increasing the number of Medicaid-enrolled children who have access to a dentist office or clinic.

The news source found that many children don’t receive the dental healthcare they need because of a shortage of dentists who are willing to serve low-income patients with Medicaid as their insurer. Pew recommends that officials increase payment levels to dentists for Medicaid patients because the federal insurance program has not kept pace with their fees.

Prevention costs less
The Centers for Disease Control and Prevention (CDC) reports that tooth decay is the most common chronic disease of childhood. Eighteen percent of children ages 2 to 4 have experienced tooth decay, 52 percent of those ages 6 to 8 are affected and 61 percent of 15-year-olds have tooth decay.

Included in the Pew criteria that determined a state’s rating for dentist services was the availability of dental sealants, which are clear plastic coatings applied to children’s molars to block tooth decay caused by trapped food and bacteria. Sealants have been found to prevent decay at a much lower cost than restorative fillings once the decay leads to a cavity.

Categories
Recent Posts
Read What Our Patients Say
Patient Reviews
I love them. They are the best. My husband and I have been with them for 15 years. You are guaranteed great service.
Debbie I.
The best atmosphere and service!
Yovnda T.
Valley Dental Associates has a great staff….they have always been friendly and accommodating to my needs. My first time there was a dental emergency, (I did have an actual first visit […]
Arlene K.
I’ve been coming to Dr. Gorman for over 20 years and have always received excellent care. He listens and takes my best interest of my visits.
Yvonne W.
I was taken on time. The staff was friendly. I have been a patient there for many years.
Linda P.
Very professional and personable service.
Maria E.
I thought this particular treatment was going to be painful during and after but that wasn’t the case. It was a good experience (for the dentist) , and even a better experience afterwards when […]
Christeen H.
I was taken on time and I was out 1 hr later (which was the length of time I was told it would take)
Pearl Z.
Very happy with the assistance and advice I received.
Eric W.
I trust my dentist completely.
Barry M.
I am very satisfied with the service I receive. Always courteous and conscientious of my dental care.
Ray H.
Great service no wait time.
Caesar C.
Mathew is terrific
Mark B.
The staff and Dr Oppenheimer are great. He pulled my teeth and I don’t even know it’s gone.
Verethia W.
Everyone is so nice. The hygienist I had (Matt) was very patient with me, and cleaned my teeth gently. He was very personable. Dr. Gorman is always friendly, knows I don’t care to come to […]
Michele S.
I love my dental hygenist Matt he is always very nice and very good at making you feel at ease while getting a cleaning. Dr. Goreman is by far my favorite dentist I’ve ever had. He is […]
Brooke G.
High level of competence of Dr. Gorman and staff; caring manner and professional interactions.
Leslie G.
Great experience with this office. The staff was really helpful in getting me in on a short notice. Dr. Challagulla is an excellent doctor, very attentive to patient’s needs and concerns. I usually […]
Oksana L.
Amazing staff
Charlotte T.
The dental hygienist gave me a thorough cleaning and irrigation of my teeth and also made excellent recommendations.
Paul L.
See what else our
patients are saying
We Accept Most Insurance Plans!
Learn More

We accept most insurance plans and will be happy to help you understand the coverage that you have. We will do our best to see that you receive your maximum insurance benefits for all covered services.

No Insurance? No Worries! See our discounts and offers here

Stay Connected With Us

Like or follow us in social media and receive special offers, interact with our online community, write a review or even book an appointment.

The above-listed practice complies with applicable Federal civil rights laws and does not discriminate on the basis of race, color, national origin, age, disability, or sex. Notice of Nondiscrimination.

Office Hours
Get in touch:
Our Location